For many chefs, a cast-iron skillet is a staple supply to have in any kitchen. Cast-iron skillets are prized for their versatility and their ability to retain high degrees of heat. Theyre also versatile and can be used on stovetops, in ovens, over campfires, and more.

If you dont yet own a cast-iron skillet, its time to see what it can do for your cooking. But these skillets arent all the same. To help you find the best option for your kitchen, weve reviewed the four best cast-iron skillets you can find.

These skillets require a little extra care and maintenancebut its well-justified by their other benefits. Still, its important to know how to care for them, and we included that information below for you, too.

Read on to discover the best skillets on the market today and to determine just how to find the skillet thats right for your needs.

Be prepared to up your cooking game with this top-quality cast-iron skillet.

The Lodge Seasoned 12-Inch Cast-Iron Skillet has all of the features that youd want in a quality skillet. Its silicone handle holder protects your hands from heat of up to 500 F, and its also dishwasher-safe for easy cleanup. The skillet itself is seasoned so that the finish releases easily and improves the more that you use the skillet. This skillet can be used in the oven, on the stove, on the grill, or over the campfirejust dont expose the handle holder to direct flames.

The Lodge Cast Iron brand earns this skillet extra points, too. Lodge was founded in 1896 and has an excellent reputation for the quality of its cookware products. This skillet, like all other Lodge products, is made in America; Lodge has two foundries in South Pittsburg, Tennessee.

Thanks to its quality and design, this skillet is right at home in a professional kitchen, in your home, or at a campground. Its available in multiple sizes, though the 12 gives you plenty of versatility.

At about eight pounds, this skillet is a bit heavy, but its weight allows it to retain heat better than lighter models. 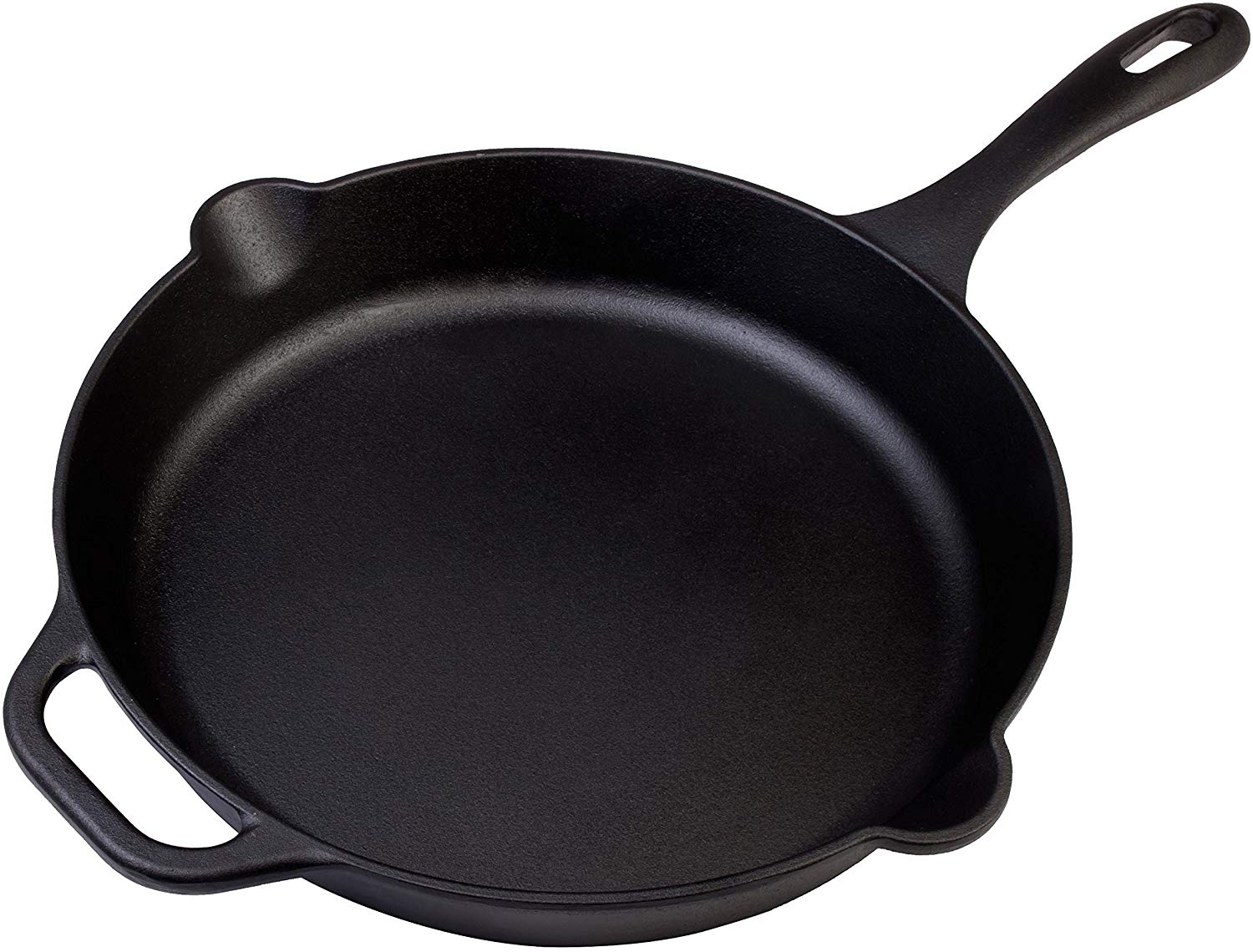 Excellent features like a helper handle and pour spout make this another great pick.

The Victoria 12-Inch Cast-Iron Skillet is our second top pick because of its features and overall quality design. A curved handle gives you great leverage, which is important when you consider the extra weight of the skillet, alone. This is also made easier by the wider helper handles, giving you stability as you cook and serve.

Other improvements to the traditional skillet design include contoured pour spouts for accuracy and bigger hanging holes. This skillet offers superior heat retention and can keep food hot for 15 minutes or longer, so if dinners done before everyones at the table, its no big issue. The skillet is also seasoned with 100 percent non-GMO flaxseed oil.

While this skillet is available in multiple sizes, we prefer the 12 over the 10 size because it has a helper handle.

Some buyers felt that the pre-seasoning was not sufficient, so depending on how particular you are about your skillet, you may want to pre-season this skillet yourself. 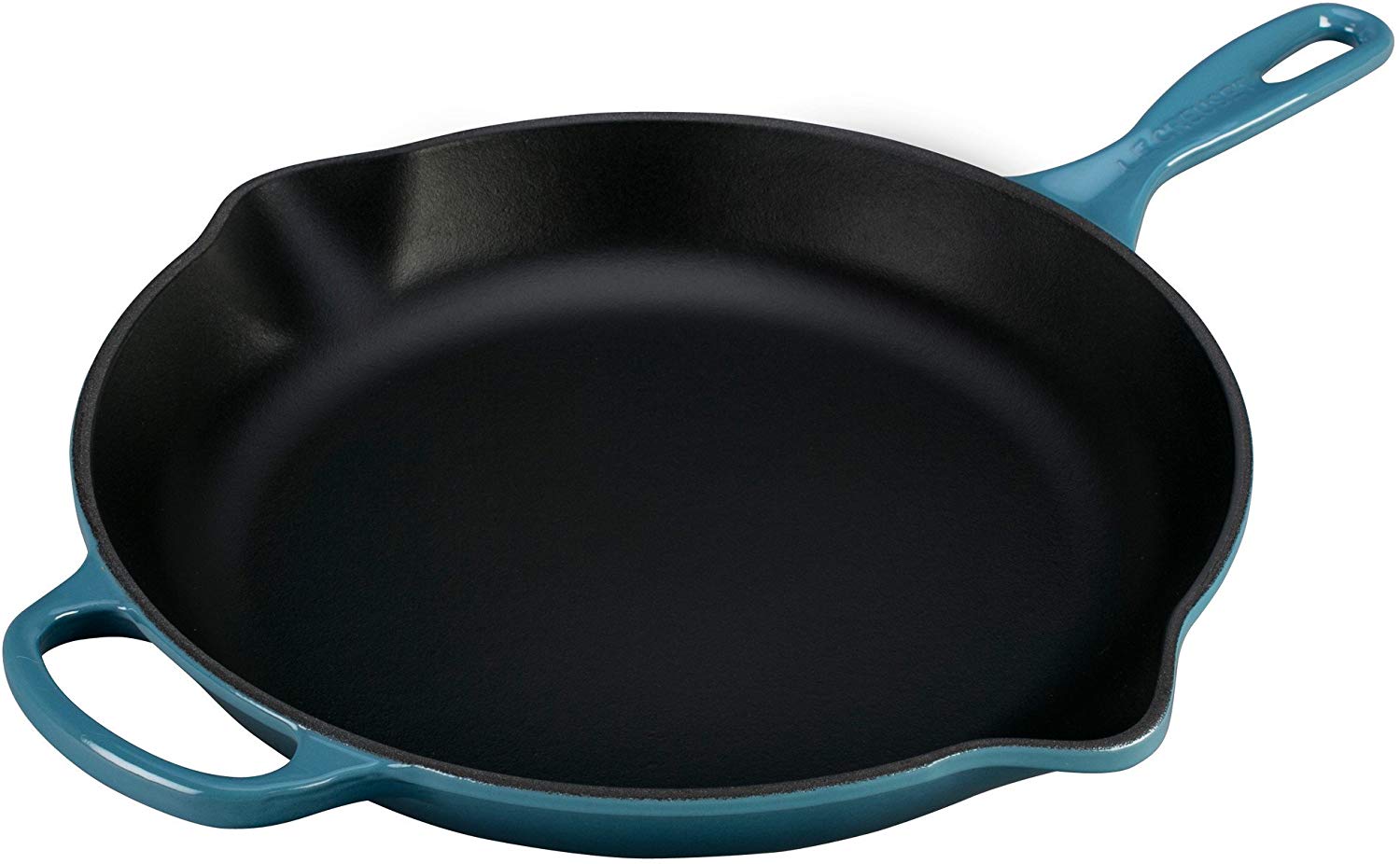 A top-of-the-line enameled cast-iron skillet from a well-loved brand.

Enameled cast iron skillets dont require seasoning, so the Le Creuset Signature Cast-Iron Skillet can save you time in the kitchen. This enameled skillet offers even heat distribution and heat retention, plus all of the perks of a cast-iron skillet without the extra time of seasoning and maintaining the skillet. The enamel on this skillet is long-lasting and resists chipping, plus its dishwasher-safe. Choose from nine colors to add some fun variety to your kitchen or to match your current decor scheme.

This pan requires very little oil, which makes it conducive to low-fat cooking. A helper handle adds stability and makes lifting the skillet easier, and pour spouts on both sides are convenient.

A number of reviewers noted that this skillet isnt as non-stick as they would like, so you may want to use oil or butter when cooking for the best results.

Get the cooking quality of cast-iron and the versatility of a wok.

The Lodge Pro-Logic Cast-Iron Wok combines the benefits of a cast-iron skillet with the versatility of a wok. This wok is seasoned with 100 percent vegetable oil, and it will only improve with use. Because its made of 100 percent cast-iron, it retains heat better than other materials and can speed up your cooking time. The flattened bottom works with all cook surfaces, including induction cooktops.

This wok is also made by Lodge Cast Iron, the manufacturer of our top pick. This family-owned business has been making quality cook products in America for more than a century.

This wok weighs 11.86 pounds, so its not as easy to pick up to toss ingredients like a traditional wok is. The value of this wok lies in the quality cook and heat retention, so be prepared to use a spatula or spoon if you need to frequently turn ingredients.

How We Chose the Best Cast Iron Skillets

When choosing the best cast-iron skillets, we evaluated each product based on a number of different factors. We looked at elements like weight, ease of use, and price to find the products that are the best buys. Below are the factors we used to rank these cast-iron skillets:

All cast-iron skillets (except enameled types) need to be seasoned at some point, and seasoning your skillet is an important aspect of its care. But, if you buy a pre-seasoned skillet, you can put it right to use without having to spend time seasoning it first. Because you can use these skillets right away, we gave preference to these pre-seasoned models.

Cast-iron skillets are heavy and they can be awkward to lift, so we looked at products that are designed to be easy to use. We considered ergonomics, the presence of helper handles, and whether the skillet can be easily lifted while wearing oven mitts. We also looked for the presence of pour spouts that can make handling a skillet easier and safer.

One of the benefits of cast-iron skillets is that theyre quite affordable, and a more expensive cast-iron skillet isnt necessarily better than a lower-cost model. We considered price when ranking our top picks and included items that had features and designs that justified their price points.

The people who use these products daily often know their pros and cons well, so we considered customer reviews. The skillets that we included all received largely positive customer reviews, even after months or years of use. While some customers had minor complaints about each product, none of our top picks received consistent negative feedback about major problems.

What is a Cast-Iron Skillet?

Cast-iron skillets are made of solid iron and are highly durable. Theyre also heavy because of their solid construction. These skillets are versatile and can be used on cooktops, in stoves, over campfires, and more. Many cooks favor cast-iron skillets because of their ability to retain heat. Once these skillets heat up, they stay hot, rather than fluctuating heat that can affect cooking. While cast-iron can hold heat, it emits heat extremely well, too. Not only will it cook the food directly in contact with the skillet, but that heat will travel up and around the food for a more thorough cook, too.

Many cooks prefer cast-iron skillets because of the many benefits they offer:

While cast-iron skillets have many benefits, there are some drawbacks, too. Your skillet will need a bit more attention and care in the form of seasoning and careful cleaning than other cookware requires. These skillets also arent the best option for acidic foods, like tomato sauces.

What to Consider When Choosing a Cast-Iron Skillet

When choosing the skillet that works best for your needs and preferences, youll need to consider a few different factors. Think about the following when evaluating a cast iron skillet for your kitchen:

Cast iron is heavy; most 12 skillets weigh about 12 pounds. However, a heavier skillet is usually a better quality one; lightweight cast-iron skillets dont perform as well. Many skillets now have helper handles that make for easier two-handed lifting and control. Cast iron may not be the best option if youre unable to comfortably lift heavier items.

The right size skillet will largely depend on what you plan to use it for. Skillets are available in a wide size ranges, and youll find options from 6 all the way up to about 15. Keep in mind that while larger skillets are more versatile, they also weigh more. Ultimately, choose a skillet thats no larger than the size youll need to prepare dishes.

Many cast-iron skillets are very affordable, and a very expensive skillet wont necessarily be higher quality than a more affordable option. You can get high-quality skillets for under $40, so a new cast iron skillet will fit within most budgets.

How to Care for a Cast-Iron Skillet

Cast-iron skillets do require special care, but with practice, these skillets are just as easy to use as other types of cookware. Once you understand how to season and care for your skillet, youll be well on your way to integrating the skillet into your kitchen and cooking.

How to Season a Cast-Iron Skillet

When you season your skillet, youll add a thin layer of oil to its surface. That oil will serve as a non-stick coating and it will gradually build up over time. While just cooking with your skillet can build up its seasoning, its often best to start with a more deliberate seasoning before you use the skillet:

How to Clean a Cast-Iron Skillet

Properly cleaning your skillet will lengthen its life and give you better cooking results each time you use it.

To lengthen your skillets life, never put it in the dishwasher or let it soak in the sink. Always clean it promptly after using it and make sure to season it periodically. Just making an effort to use the skillet regularly can help to keep it seasoned and preserve its life.

Be sure to also check out the following resources that can help you to outfit your kitchen with the best equipment.